LEARN ABOUT EACH IGUANA I SHARE MY HOME WITH

EACH OF MY IGUANAS HAS THEIR OWN STORY, LEARN ABOUT THEM AND GET TO KNOW THE IGUANAS THAT MAKE UP ONTARIO IGUANAS 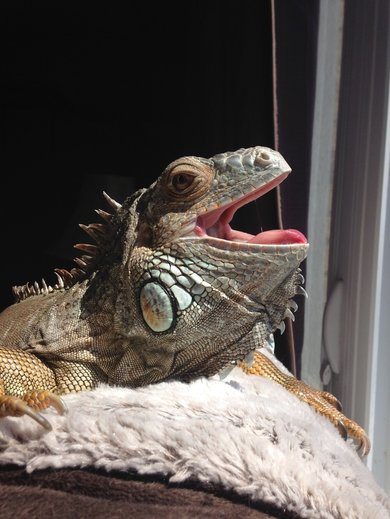 Sassy
Female
Green Iguana
Born in 2006 (estimated)
I rescued Sassy in October 2010, she was a birthday gift to myself. wiTH AN AGGRESSIVE PERSONALITY SASSY USED TO LAUNCH HERSELF OFF HER BASKING PLATFORM AT ME IF I GOT TO CLOSE. DESPITE HER PERSONALITY AND NEGLECT SHE EXPERIENCED IN HER PREVIOUS HOME SHE CAME AROUND QUICKLY WITH PROPER FOOD, CARE AND SOME TRAINING.  Sassy has been through everything with me since I got her anD BECAUSE OF THE PASSION SHE STARTED IN ME WITH IGUANAS AND THEIR CARE she is the reason Ontario Iguanas exist. 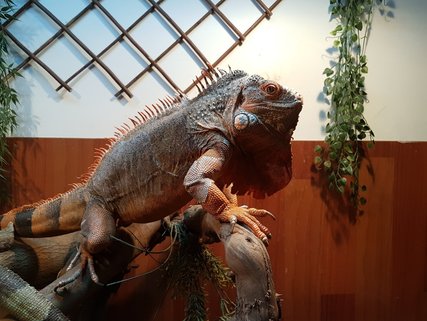 Billy
Male
Super Red Green Iguana (no green ON HIS BELLY)
Born in 2010 (estimated)
I rescued Billy in early 2012 from an owner who was keeping him in a SMALL tank WITH ONLY ONE STICK TO CLIMB ON. Billy was underweight and not well socialized. Due to his calm personality Billy was easy to work with and has been a joy to have AND WATCH HIM GROW INTO THE HANDSOME MAN HE IS TODAY. 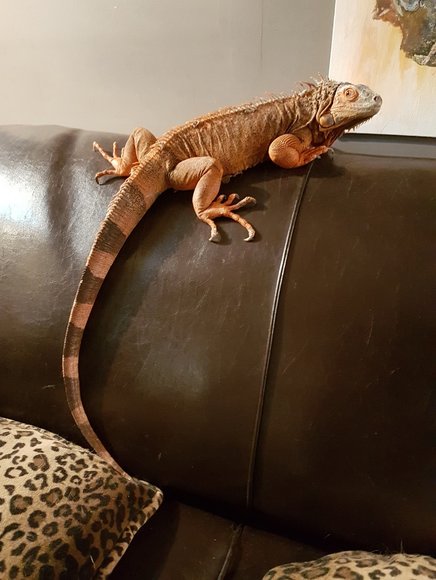 Phoenix
Female
Super Red Green Iguana (no green ON HER BELLY)
Born in 2011 (estimated) passed away in 2019
I purchased Phoenix off her previous owner from Ottawa in LATE 2013 and had her shipped to me. YOU CAN SEE HER UNBOXING VIDEO ﻿HERE﻿ She was underweight, had layers of stuck shed on her spikes and tail. she also was extremely flighty/aggressive .  she has needed much more training then my previous iguanas. she is stubborn and likes her personal space. she has come a long way since i got her and I am so proud of the beautiful lady she is now

Molly
Female
Axanthic Green Iguana
Born in early 2013
I purchased Molly from the U.S. in early 2013 and had her, along with Pip, shipped to me. you can see their unboxing video here. I raised her since she was a baby. In the summer of 2015 she laid a clutch of 54 infertile eggs. due to her fast growth rate molly gained a lot of attention from views on social media. Molly quickly outgrew both Phoenix and Billy who both have at least 2 years of age on her. She is a shy girl with new people but loves to explore. 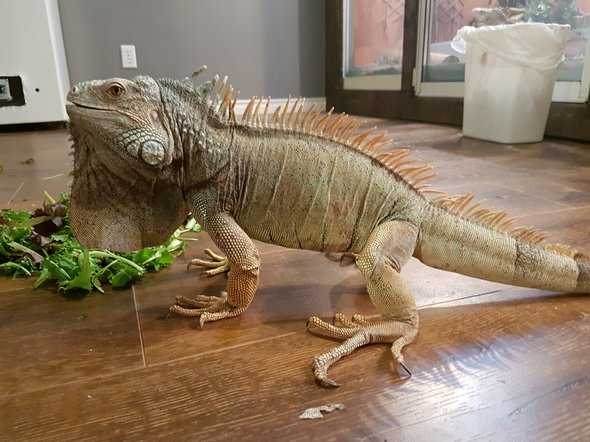 Pip
Male
Axanthic Green Iguana
Born in early 2013
I purchased Pip with Molly in 2013. Pip came to me with worms and had to be given a de-wormer twice to remove them. Due to having worms Pip's growth was stunted and even after the worms were gone he still continued to grow slower than most. However in the past year Pip has ballooned and become such a handsome young man. Pip is atleast 2 years younger than Billy and already his jowels, fat stores on his head and his spike crest are bigger. He is going to continue to grow and soon he will outgrow Billy in body mass as well 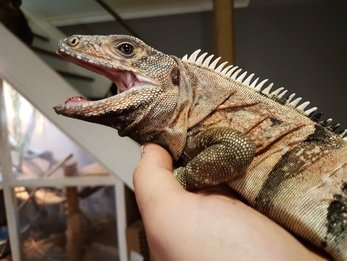 Chilli
Male
Black Spiny-Tailed Iguana (Ctenosaura similis)
Born in mid 2014
I purchased Chilli from the U.s. in late 2015, I was asked by one of my followers if I could take him in. At the time I was looking into other species of iguanas so this fit perfectly. Chilli needs a lot of training to be comfortable with me but he has already come a long way. chili has started becoming more confident when i approach his enclosure, standing his ground more often and puffing up. i absolutely love watching him grow and the colours on his side glow in the sun.